Over the past decade, Southeast Asia has been through a rapid phase of digital transformation powered by a series of trends. These include a dramatic increase in internet access, a surge in social media usage, increase in e-commerce purchases, implementation of cashless payments or e-wallet, e-hailing related activities, and many more.

These trends which have powered digital transformation at a large scale has led to the rise of the digital economy. Google, Temasek, and Bain, in their e-Conomy SEA 2019 report, stated that the digital economy in Southeast Asia has tripled in size over the last four years to $100 billion and will triple again to $300 billion by 2025 becoming one of the world’s rapid-growing ground for online commerce.

The digital disruption has changed users' expectations and interactions with retailers. As the digital market gets more competitive, many companies are now obsessed over discovering smarter technologies such as geolocations, artificial intelligence, and machine learning ability that they could implement to their business to better serve their customers.

Without further ado, let’s look into how this disruption has changed the landscape of the region’s economy.

Turning Crisis Into an Opportunity

Digital transformation was not a new topic, it was actively discussed since the 1990s but it was the great recession in 2008 that created success stories of tech giants such as Whatsapp, Venmo, Groupon, Instagram, and Uber. How they were able to innovative technologies that play a big part in digital transformation have inspired many more entrepreneurs to follow suit.

In Southeast Asia, there are already over 7000 digital start-ups - 80% of it is based in Indonesia, Malaysia, Singapore, or Vietnam, many of which are gaining the status of unicorn and attracting more global investors to the region.

Some of these tech companies include names such as Grab, Fave, Lazada, and Shopee in Singapore and Malaysia, Gojek, and Tokopedia in Indonesia. These tech giants in Indonesia especially have significantly expedited the digital transformation in Southeast Asia for the retail industry.

As these startups play a significant role in offering job opportunities and contributing to the economy, the governments in the Southeast Asian countries have allocated funds to further boost the capabilities of these companies.

In its budget 2020, Malaysia has allocated RM50 million to the 5G Ecosystem Development Grant to significantly enhance Malaysia’s economic competitiveness through seeding technological developments by Malaysian companies to ride the global 5G wave.

On the other hand, Singapore’s 2020 budget has allocated S$300 million For Deep-Tech Startups as a way to improve support for deep-tech startups in emerging technology.

These efforts are put in place to boost the digital economy of the respective countries through digital startups. 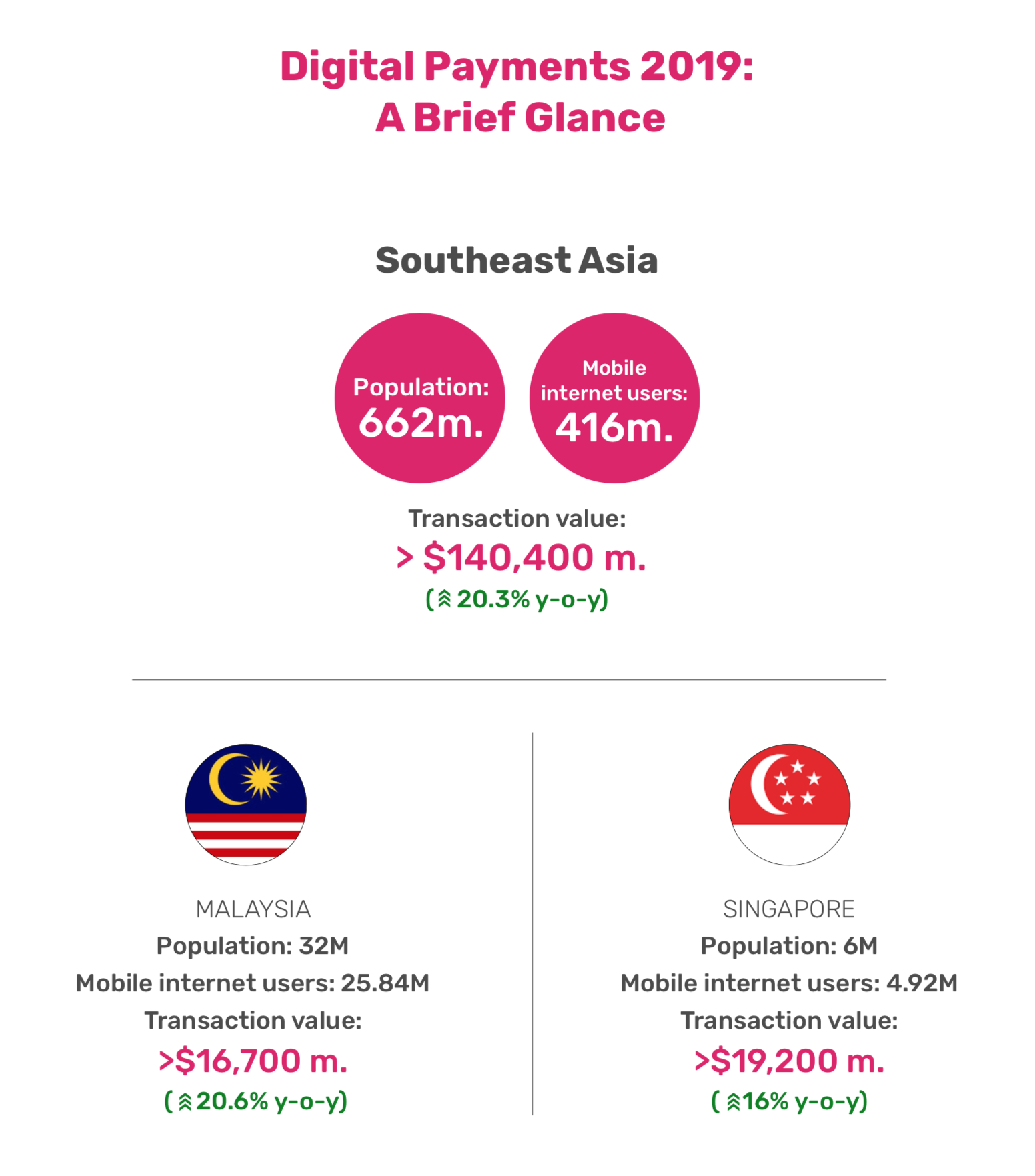 According to "Retail Trends 2020" based on cumulative data from Statista, ITU, and Data Reportal show that more than 400 million people across Southeast Asia use the internet today, accounting for almost 10% of the world’s total internet user base.

With the growth of internet users, it is obvious this digital wave is changing almost every aspect of business and social life in Southeast Asia.

Now, jumping in on the digital transformation bandwagon is no longer an option for businesses, but a necessity.

Businesses that are late in joining digital initiatives or those that choose to ignore digital transformation will run the risk of commercial obscurity, inefficiency, and helplessly losing to competitors.

Some of the companies that have failed to evolve with technology include Kodak, a film technology company that dominated the photographic film market during most of the 20th century. The company was strictly focused on the success of its film market that it failed to recognize the opportunity of the digital revolution and filed for bankruptcy in 2012.

Nokia, one of the global leaders for mobile phones back in the late 1990s to early 2000s, however, Nokia failed to see how the internet was the future of communication and not voice.

While other companies were focusing on improving its software to better accommodate the use of the internet, Nokia remained focused on its hardware. In 2014, Nokia finally released its first smartphone but was too late then. Their products were not competitive enough to challenge the lineups of smartphones made available in the market.

Without taking into account the profit loss, the downfall of these companies, especially tech giants have resulted in a massive loss of income and employment. This in general impacts the gross domestic product (GDP) of the country.

Many other companies have failed to take steadfast action when it comes to digital transformation. Those that remain competitive are those that evolve with technology.

As technology progresses at a rapid pace, businesses will have to come to terms that the sooner they embrace digital transformation, the better chance they have at surviving through changes.

As the digital economy grows at an unstoppable rate, its impact goes beyond increasing consumer spending as it opens up millions of job opportunities. 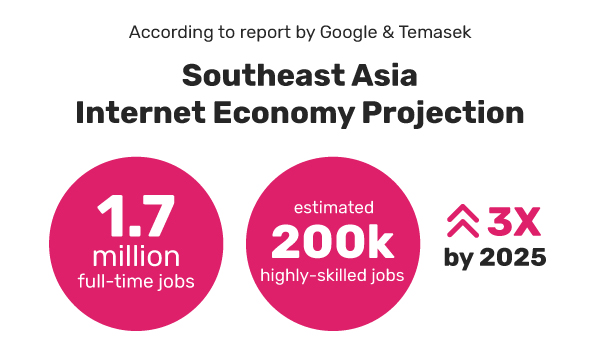 According to the report by Google and Temasek, Southeast Asia’s Internet economy is projected to create 1.7 million full-time jobs by 2025.

As digital companies continue to expand and grow under this digital economy, an estimated 200,000 highly-skilled jobs will also reportedly be created by 2025 which equals three times more than the amount generated by the Internet economy this year.

Reinforcing this claim, Shopee experienced growth in its workforce by 176% from 1,384 to 3,831 employees in 2016 to the third quarter of 2018. This growth means that it has been hiring an average of 3 people per day over that span of 2 years.

This upward trend in job opportunities in digital companies inevitably contributes to lowering the unemployment rate of the region and indirectly lowering the risk of a recession.

ASEAN is expected to become the world’s fourth-largest economy by 2030, and it is a growth that will be led by its tech-savvy younger population that is rapidly climbing up the socio-economic ladder.

On the other hand, Google Indonesia predicts the country's digital economy will be worth around IDR 1.7 quadrillion or $124.1b gross domestic product (GDP) by 2025, more than triple the amount it recorded in 2020.

Some of the digital giants contributing to this digital economy in Southeast Asia include Grab, GOJEK, Lazada, Shopee, and many more.

In its Inaugural Social Impact report, Grab said it contributed US$5.8 billion (S$8 billion) to South-east Asia's economy in the 12 months leading up to March 2019, through driver, delivery, merchant and agent incomes and sales generated through its platform and Grab unit Kudo.

On the other hand, based on a recent study by Universitas Indonesia, Indonesia’s local bike ride-hailing company GOJEK contributed about RM13 billion (IDR44.2 trillion) to the Indonesian economy in 2018.

As technological advancement progresses more drastically, more and more businesses in Southeast Asian countries will have to prepare for a complete digital transformation and this will inevitably accelerate the economic growth of the region at an unprecedented level.

4 Reasons to Take Your Business Online